"Hecker plays like an angel ... the beauty of her sound is enhanced by an exquisitely elegant line and sweeping lyricism. There is absolutely no artifice to mislead the audience; her performance comprises musicality and pure talent." (by Javier Pérez Senz, El Pais, 06/2008)Cellist Marie-Elisabeth Hecker made her international breakthrough with her sensational success at the 8th Rostropovich Competition in Paris in 2005, where she became the first contestant in the event’s history to win the first prize as well as two special prizes. Since then Hecker has become one of the most sought-after soloists and chamber musicians of her generation, recognised for her deep expression and natural affinity for the cello, with Die Zeit describing her playing as "heartbreakingly sad and instinctively beautiful".

Born in Robert Schumann’s hometown Zwickau in 1987, Hecker started playing the cello at the age of five and attended the Robert Schumann Conservatory, before the distinguished German cellist Peter Bruns became her principal teacher. She continued her studies with Heinrich Schiff and subsequently took part in masterclasses with eminent figures such as Anner Bylsma, Bernard Greenhouse, Frans Helmerson, Gary Hoffman and Steven Isserlis. Early recognition came when she won Germany’s important Jugend musiziert competition at the age of twelve, followed by the special prize at the 2001 Dotzauer Competition and the Borletti-Buitoni Trust Award in 2009. She is supported by the Kronberg Academy.

Highlights of season 19/20 include trio concerts with Martin Helmchen and Antje Weithaas as well as her debut with the Orchestra of the Komische Oper Berlin. Furthermore, she will perform chamber music with Julian Prégardien, Christian Tetzlaff and Carolin Widmann amongst others.

Marie-Elisabeth Hecker was appointed a professor at Hochschule für Musik Carl Maria von Weber in Dresden in August 2017. In co-operation with Music Road Rwanda she regularly travels to Rwanda in order to support a local music school with concerts and educational projects. 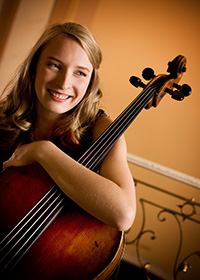